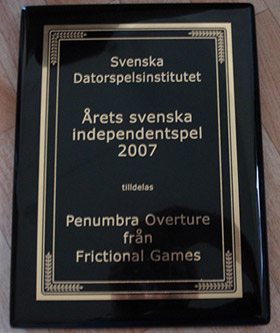 Posted on Posted on 9th May 200729th November 2019 by frictionalgames in News, Penumbra

Originally posted by Jens.
Some links in this article have expired and have been removed.

During this years “Spelgalan”. the Swedish game industries yearly award event, Penumbra: Overture was nominated in the Independent game of the year category by the Swedish computer games institute. We can now happily report, and give you a nice image to behold, that we won!

Anton Adamse attended the show in the hopes to bring home the price, as this came to be he proudly entered the stage to receive the award and in doing so got told the following…

“An independent game is often regarded as well done, as it succeeds with exceeding any particular detail. This game however, succeeds as a whole. Everything from concept and presentation, to execution and distribution feels thought-out and well followed through.”

We send our congratulations to the other 4 nominees: PacPac, Origo, DreamLords and Pandaland.

A slight problem remains, where in our office should we place this award?