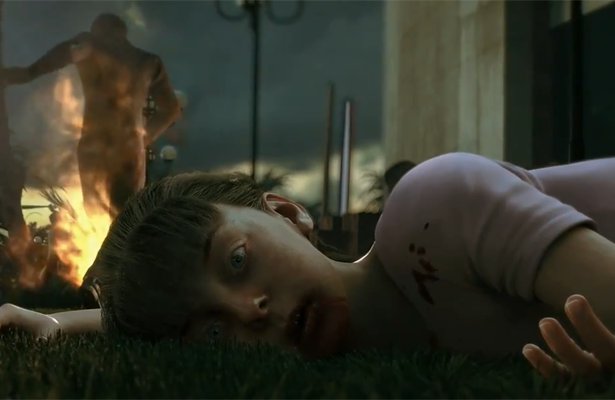 By now most of you have probably seen the teaser trailer for Dead Island. If not, you can check it out here:

This trailer has been getting tons of attention over the Internet and many seem to think that it is one of the best game trailers ever. I find that this is quite interesting, since just about everything that makes the trailer good are things that modern video games lack. I would even go as far as to say that a video game made using modern gameplay-centric design could never create something that gives the same experience.

This is why I think so:

The video does not have follow the normal rules of making a narrative (where time flows coherently through plot events), but instead provide a disjointed one. Past and present are not explicitly stated, but is something that the viewers must figure out themselves. Game with a focus on story just do not work like this and instead go through plot points in a predetermined (although sometimes branched) fashion.

In order to get the same kind of feeling you get from the trailer in a game, stories needs to be looked upon in a different way. A story should not be seen as a string of plot points, but as a certain essence that is meant to be communicated. (See this post for further discussion on the subject).

Violence is not the focus nor the fun part

This is something that I have talked about lots before, most recently in a discussion on Dead Space 2. When you start to focus on making sure that all gameplay is fun, then that trumps any other emotions that could have been evoking. The violence in the Dead Island trailer is not fun. It is desperate, repulsive and tragic. How can you possibly hope to evoke the feelings of a man forced to “kill” his own daughter if your aim is for it to be fun?

An important part of video games today is that they stop you from making progress unless you meet specific requirements. This is mostly in the form of some skill-based challenge (succeed or restart), but can also be in the form of navigational or puzzle-like obstacles. While of course imperative in some games, this sort of design can greatly decrease the emotional impact of events. Mainly because forcing a player to relive an event dilutes its impact and sets focus on mechanical aspects. Secondly because blocking the player from progress can make certain situations unbearable.

The trailer has both versions of this problem. For instance, the chase sequence where the child runs to the door is not something that works when repeated. Also, the event when the child falls through the window is an example of something that you do not want to replay or get stuck at. (A more in-depth discussion can be found here.)

Just so I am clear here: I do not mean that a game should try and replicate the events exactly like in the trailer. Video games are a different medium from film and needs things to be done differently. Instead what I do mean is the recreation of the essences of these events and situations; to provoke the same kind of emotions and thoughts. Not to make a direct copy.

What I mean by this is that you need to see the whole thing to get the full experience. Unless you see the trailer until its end, you will not the get full meaning of the work. Mainstream games almost never work in this way, but rather focus on maximizing the entertainment value moment-to-moment. This is partly because of the goal to make games “fun” above all else. Other causes are the focus put on length of the experience as a large part of the value, and a general attitude of games as products rather than works of art (explained nicely here and here).

With the above in mind, it should come as little as a surprise that I find it highly unlikely that Dead Island will be anything near what the trailer is like (although I hope the reactions to this trailer inspire them to give it a shot and perhaps succeed!). I think there really is a desire for games that offer a different and more emotional experience, the attention this trailer got being a clear sign of that. But if we stick to the tried formula of making video games, these kind of experiences will remain beyond our reach.