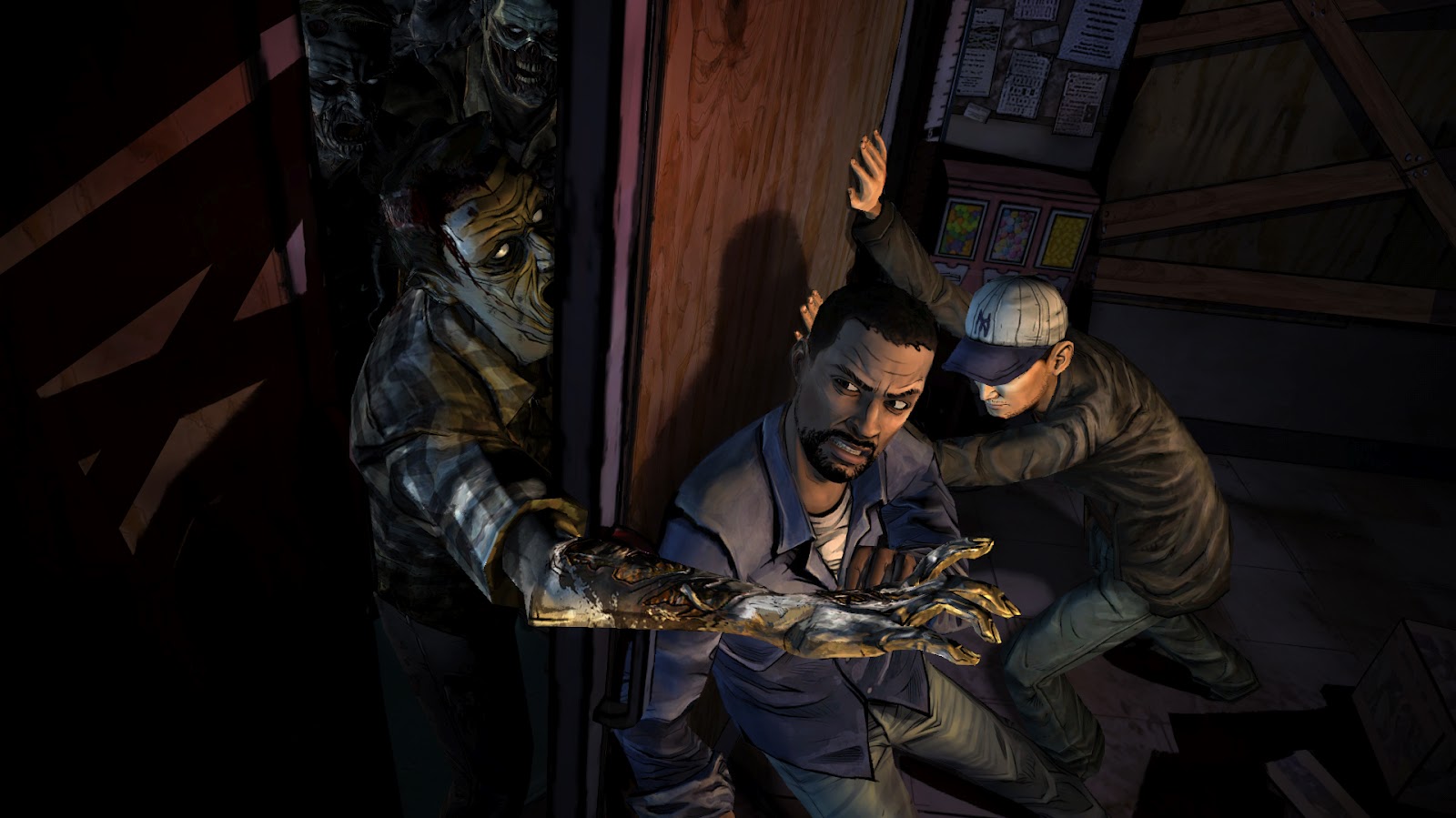 I played through the first episode of The Walking Dead recently and few stuff popped up that I thought was worth discussing. For those of you who do not know what The Walking Dead is, it is a horror adventure game based upon a comic book (which is now also tv-series) featuring Heavy Rain inspired gameplay. It is developed by Tell Tale (makers of the Sam and Max reboot, etc) and is released on an episodic basis. I was unsure if Tell Tale could deliver a game with this kind of atmosphere, but having played I have to say that it is quite successful. The first episode is not a master piece by any means, but contain a few things worth bringing up.

The comic-book inspired art direction combined with so-so animations does not look all that inviting and immersive. But when you play the game, it works very well and does the job. This even though the drama of the game is mostly about close-up dialog and relationships. I think this is a very important lesson about not having to have photo realistic graphics even though the game is meant to focus on human emotions. I have a hard time saying that Heavy Rain, which as a lot more gloss on its visual, managed to elicit any more emotions from me. However, watching trailers, Heavy Rain seems a lot better in this aspect and I thought Walking Dead looked downright horrible at times. But in-game it turned out not be really matter. This is also lesson in taking care of how you present the game in trailers and such, and make sure that the feelings you get from actually playing the game comes across.

Just like in Heavy Rain, a big feature is to make hard decisions throughout the game. You must choose who to save, whether to lie or not, etc. Most of these are made using timed dialog choices, where you only have a short time to decide what to do. On paper I think it sounds okay, but I just do not like how it feels when actually playing. There is just something that bothers me in knowing that all of these choices are prefabricated and that I the choice I did not make might have been better. And it does not really matter that the choices do not affect the game mechanically (eg like in Mass Effect where bad choice might mean less gain), there is just something holding me back from playing along with it.

I think a big problem is that it is way too obvious that you are actually making a choice. Supporting this hypothesis is that the game by default gives a pop-up hint of the consequences of a choice (eg that a character trust you less), and removing this makes it a lot better (but still not good enough). A few choices are made in a sort of “Virtua Cop”-like manner where you have to point a cross-hair over a target and then choose an action. It is not always clear that these are actual choices, in part because it is much more analog (not just choosing from a list of options) and partly because it is less clear that you can only can choose a ONE of the presented alternatives. These sequences did not bother me at all as much as the dialog options.

While the game does a lot to remove annoying adventure game features and make a smoother experience, it also falls back upon some annoying aspects of the genre. The most obvious is that of pixel hunting. There are only really two major adventure-game like puzzles in the game and both of these has the player searching for one or several objects, non-obviously located, in the environment. The worst of these is a remote control that is hidden in  drawer which is not accessible until you have done certain unrelated actions. This caused me to wander aimlessly in the scene for far too long.

I think it is really important to try and minimize this sort of things as it makes you go about exploring the scenes in a very unnatural way. Best is if the player can sort a puzzle out without having to search every nook and cranny for items.

Once you get caught up wandering without any real goal, like I mentioned above, you start doing the same things over and over. This is when you start noticing the slim output of lines that characters have. When asked the same question, they just repeat the same line they gave before. This is especially jarring when it amounts to longer exchange between the protagonist and a supporting character. Repeating canned responses like this really breaks the sense of immersion for me. I just simply cannot role-play when I am subjected to this sort of repetition.

I think the game should have removed hot-spots, given leading answers from characters (especially the protagonist), etc. Anything to push me in the direction and to keep up the make-belief that it is real characters inhabiting the virtual world. Now they just come of as cardboard signs the moment you start wandering off the intended path.

I’d say that The Walking Dead is worth playing and being just over 2 hours of gameplay in the first episode it just not that much wasted time in case you end up hating it. While the game did not blow me away, I was pleasantly surprised and am intrigued to see how the next episode will turn out.

If anyone else has played the game, I would love to hear your thoughts on the following.:

– What did you think of the graphics? Was the discrepancy between trailer and in-game also large?

– What did you like the choices? Did it feel like you could roleplay or was it hard to put as side that there was a better choice?

– How did you feel about the repeated lines? Not bothering at all, or a nail in eye each time they were encounter?