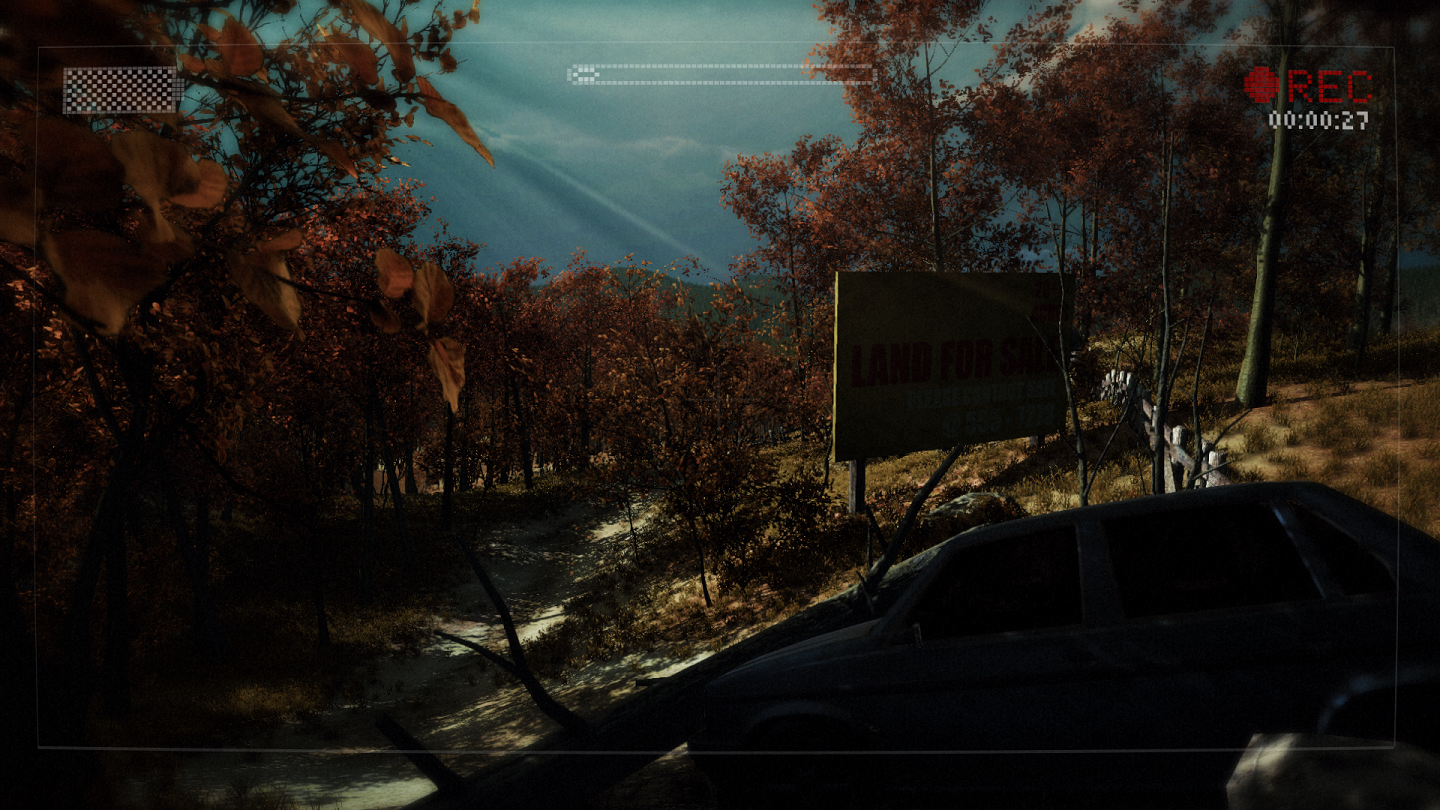 Slender: The Arrival is the commercial version of a free game called Slender. The original was based upon a a simple concept: find eight pieces of paper before the Slenderman, a now famous creature that started out as an internet meme, gets you. I wrote a blog post about the game when it was released and as a short experiment I found it quite interesting, but wondered how one would make it into a longer experience. So when I heard a commercial version was in the works I became quite curious, and gave it a go soon after release.

My initial guess was that the game would essentially be like the original, but set in different locations. Each of these would have special collectibles, instead of the original’s pages, and some form of modifiers, e.g. mud that makes movement slower. So when I launched the game, I was quite surprised to find out that it started out as an adventure game. Slender:  The Arrival began with my car having broken down somewhere in the forest; I was met by a beautifully rendered forest path, the sun was shining and there was a sense of calm. As I started walking the sky got increasingly darker and by the time I arrived at a desolate house it is almost pitch black.

This was a very simple start, but also an extremely effective one. It set up a notion of how things ought to be and gave something to contrast with later on. Part of the trick was also that I knew there would be a Slenderman, but had no idea what shape it would take. The game had planted an idea in my head and put me in a very suggestive state.

Walking around in the abandoned house, I found notes, news clippings and other things that hinted of normality. But among these were also signs that something was wrong. At first it was just some weird graffiti and the tone of some texts, but as I progressed further things got worse. Having found a flashlight and a key I came across a room filled with weird sketches. Numerous of these depicted a dark, slim figure. My hear-rate was quite rapid now. The slow pace combined with my expectations was making my imagination run wild. Approaching a window, a scream echoed through the night.

I did not want go outside, but felt that I had to. I exited the house and entered the woods. Being unsure where to go I headed in the wrong direction and became lost in the wilderness. At this point a slight distortion appeared on my screen and a vague whisper was heard. Normally, I am not very affected by horror games, but at this moment a chill literally ran down my spine. I was honestly unsure if I could continue playing the game any longer. The build-up was hitting with some force.

Eventually I found my bearings and headed in the direction of the scream. I walked through a gate and a new map loaded. I started the new map facing a canoe and some ranger cabin; the environment did not seem to fit and the house I came from were nowhere to be seen. Instantly I had a real problem with the continuity. It felt like I had been transported somewhere else entirely. Walking around I also quickly figured that I was supposed to collect eight notes scattered around the area. I had no idea why, it made no sense to my subjective narrative. All of this meant that my sense of presence took a drastic drop; a drop from which it never recovered.

The game was still spooky, but a far cry from what it had been. I managed to pick a few pages and it was not long until I got visual distortions and heard creepy sounds. I quickly understood that this was simply a mechanism for telling me when Slenderman is getting closer, and it never became very effective. Soon after I had some sightings of the creature too. It was spooky at first, but could not compare with the terror felt during the prologue. The encounters became increasingly frequent and the effect was lost. Finding the notes turned out to be tricky for me, and I found myself running in circles most of the time.

At this point my sense of presence was obliterated and the game had lost all of it horror. It is all just a mechanical and repetitive trudge.I eventually died and tried again, but never managed to to complete the level. I quickly checked some guides to make sure was not missing out on some upcoming twist, but it seemed the collect items style of gameplay remained throughout. I felt I could not really bother forcing my through the levels and gave up on the game.

Despite being let down (or rather having my predictions confirmed), my time with the game was extremely valuable. The prologue was fantastic and induced horror in way that I have not felt in a long time. While the game failed to make use of its excellent introduction, it gave me a lot to think about, providing more insights into what really makes a great horror experience.

Now follows a summary of the most important takeaways:

Most of the creepiness comes from the game featuring perfectly normal situations and locations. It is easy to draw parallels between the game’s scenery and your own life experience. There is no need to figure out the world and your place in it, all that comes automatically. This makes it possible to become immersed in the atmosphere almost instantly. It also makes the game leave a certain amount of dread behind after you have finished playing.

It is worth noting that having normality can cause problems as it also sets strict assumption of how the world should work. This is mostly problematic when a game has a wide range of interaction possibilities. It often cause players think some actions ought to be possible but are not or that the world behaves in the wrong way. Slender: TA escapes this problem by limiting the interactions available.

When I first entered the house in Slender: TA it was engaging to explore it; every room I visited added to the atmosphere. But once I had gone through all rooms I was unsure how to progress. This state lasted for quite a while and I just ran aimlessly around trying to figure out what to do next. It turned out I had just missed a, not very visible, flashlight and were therefore been unable to properly explore the pitch black rooms. For the five or so minutes I was stuck I was pulled out of the fantasy.

This tells me that is is of utmost importance that the player does not get lost like this, especially at the start of the game. When a game is all about atmosphere it must always be clear for the player how to continue. One must make sure the focus is to become part of the virtual world and not to figure out its rules. Slender: TA has this problem later on as well, and is an excellent example of why maintaining the flow is so important.

When I started out the game, I felt like as part of a narrative. Sure it was not the a very complex one, “car breaks down and it starts to get dark”, but it felt consistent and was easy to become immersed in. The most important aspect of this is that the player’s thinking becomes centered around story elements. Happenings are not evaluated as output from a rule system, but as occurrences inside a story. This is a strong contributor to the sense of fear; for instance, sounds are not just part of some random event generator but utterances by the world that the player inhabits.

However, Slender: TA is not able to sustain this for long. The narrative reason for moving on became increasingly vague, and I soon found my self doing things simply because the game told me so. This is devastating from a horror standpoint as the world now get treated as system. The fiction is no longer the point of reference, but any event is evaluated in an abstract manner.

HUD Can Increase Sense of Presence

It is often said that a really immersive game should get rid of any HUD elements. This is simply not true, and in many cases it is actually the opposite. Among many things, the HUD can be used to portray information impossible to display, help keep the player on track and add to the story of the game. In this game the HUD is that of a camcorder; looking at your shadow early in the game shows that the protagonist is in fact holding an actual camera. In a way this is a bit forced (why would one be recording at a time like this?) but I think it is rectified by the positive effect it has on your sense of presence. By having this filter between the world and your vision, you are never seeing anything directly; it becomes easier to accept the rendered, artificial world. By using this kind of HUD the game also emulates the feel from a shaky cam ghost/ufo/bigfoot/etc video, something which is closely tied to the mythology of the Slenderman and increases the effect further.

The camera HUD is also a great vessel for the visual effects that happen when Slenderman is near. Static noise, image tearing and chromatic aberration (where the components of a color are spread out) are all common camcorder artifacts and shaky video tropes. It is a great way to symbolize the presence of an evil being and connects the game with the surrounding fiction. In weird way, this also links the game to real-life: if you see any of these signs when filming, you will interpret them in a very different way.

Despite all the good stuff, I think the HUD is still underused. The most obvious thing to add would be some kind of navigational help. This would be a great way to fix the flow problems that were pointed out earlier. The camera HUD would also have been great for displaying story information; messages and strange images  could pop up in the HUD and give more depth to the narrative.

Being Cute Just Ain’t Worth It

The house at the beginning contains two a posters with logos of the developers. I really dislike things like this. There is no reason for these posters to be in the house apart from being an attempt at a joke – a joke that I think few appreciate. If a game wants to have  a world that the player take seriously, these type of things are horrendously out of place. They destroy the sense of disbelief and makes the player less likely to put any significance to objects found in the environment  In a game like this it is crucial to make sure of ever last detail serves a purpose and help tell something of the game’s story. They should never be used to deliver some lame joke or easter egg.

Summed up, Slender: The Arrival is far from a great game and has many flaws. But it also contains some excellent things. Especially noteworthy is the the build-up, which is one of the best I have ever seen in a game, rivaling my memories of the first Silent Hill. The bad elements are also bad in a very enlightening way, which makes the game especially interesting. It is a must play for anyone interested in horror.

My blog post on the original free version of the game.

Information on the Slenderman: http://knowyourmeme.com/memes/slender-man