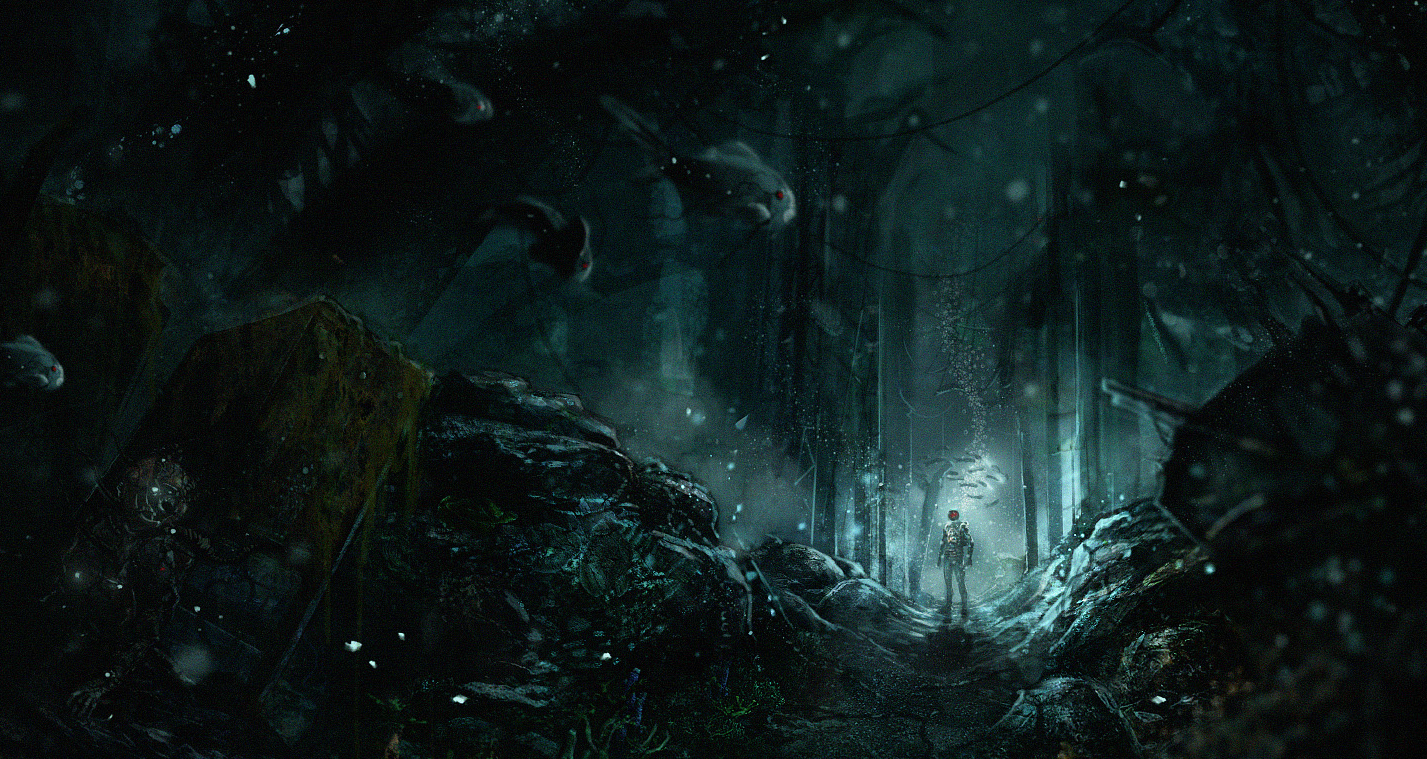 Posted on Posted on 17th September 201517th December 2019 by frictionalgames in Blog, Life at Frictional, SOMA

How do you design sound for a game that takes place miles under the ocean in an abandoned complex with a plot that deals with the perception of reality? The answer is… experimentation!

My name’s Samuel Justice, I’m audio director on SOMA where I lead a team of 6 fantastic folk to help create the audio for the universe of SOMA.

SOMA is an audio designer’s dream. Horror games are well known to give room for sound to breathe and live, which is why sound is so memorable in many horror titles. When you couple this with a rich and diverse universe such as lies behind SOMA, the audio potential is endless. This is something we really wanted to play with.

For those of you who don’t know, SOMA takes place in two very distinct sonic spaces, underwater and the non-underwater world of Pathos-II. What we were really after was to establish two very different and unique soundscapes: the underwater soundscape and the “air” soundscape. From the get-go we knew that these two soundscapes had to contrast with each other heavily, so if we were to turn off the visuals, you could instantly tell where you were. We also developed some new and very special systems to tie into these worlds.

I could go on for far longer than you’d want about how we approached the sound in SOMA, but instead I thought I’d pick out some audio treats that we hope you’ll like.

SOMA deals with many interesting themes, but the main focus is on what it means to be a living, breathing, conscious entity. From the start we decided to take that description and run with it for the “air” soundscape, where everything is heavily grounded in reality. The world of Pathos-II sounds dirty, gritty, crumbly. When walking through the corridors of Upsilon we want you to feel cold and lonely through the sound alone and when you hear something that doesn’t sound quite human in the distance, that still needs to sound realistic and grounded.

To achieve this we introduced a new system which was never given a formal name, but we’ll call it the room size system for now. What this allows us to do is read how large a room is and play content relative to the size of the space – one prime example is the player’s own sounds. A recent tweet went out saying that SOMA featured over 2000 footstep sounds, and this is due to the room size system. Instead of recording a bunch of footsteps on various surfaces, our foley artist Tapio Liukkonen actually went out and scouted for interesting-sounding locations of varying size.

This is where the footsteps were recorded, so when you’re running through a large hall, you’re actually hearing the sound of a large hall, none of it faked through reverbs or other processing (which can end up taking away some of the life of the sound). Instead you get the air and size of real spaces. This might sound like a minor detail, but in a game about exploration and discovery, this lends itself massively to a sense of reality when roaming the halls and corridors of Pathos-II.

So how about underwater? Again, we wanted this to be grounded in reality, so instead of processing various sounds or making them muffled, we opted for recording a huge amount of fresh content with underwater microphones (known as hydrophones) and contact microphones (special microphones that only pick up vibrations in objects rather than the air). This gave us a huge palette of interesting yet grounded textures to play with.

Here is a clip showing Tapio during a recording session:

One example is a sequence where the player has to climb out of a vessel, in the audio clip you can hear the squeaking and interesting sounds made by the player that you wouldn’t really capture from a regular microphone.

Another cool feature for the underwater environment that we introduced was that we wanted all of Simon’s sounds to be binaural – his footsteps, his diving suit and even his speech. So when we recorded his dialogue at SIDE studios in London, we requested a special setup that recorded all his lines Binaurally as well as normally for the underwater dialogue. That means that if you play the game with headphones – you will feel as though you’re in the helmet with Simon, wandering the depths of ocean floor.

For the voiceover implementation and processing of the game, we turned to Kpow Audio, a small team of 2 from Australia responsible for the amazing sound in games such as L.A. Noire and The Banner Saga. Here’s what they had to say about their experience:

“The job of processing the SOMA dialogue was fairly wide-ranging: we had underwater helmets; audio logs of all different shapes, sizes and conditions; public address systems; video postcards; dispatch messages; a host of robotic devices and more. The audio team have done an amazing job at creating an audio environment that balances impact and authenticity, and it was obvious from the start of our involvement that the dialogue needed that same balance.

To imbue our own work with this type of authenticity, we tried – wherever possible – to recreate the signal paths described on screen. Due to the huge variation in speaker types and placements in SOMA, our first step was to record a unique set of Impulse Responses, capturing the behaviour and tone of a number of different speakers, which could then be applied to sounds in post production. The speakers were then recorded inside different metal objects, to recreate the numerous resonant environments found within SOMA’s sprawling landscape. These “enclosed” reverb responses were also used to produce the underwater helmet effects found throughout the game.

The same technique was employed in a more direct way as we piped large portions of the dialogue out of the speakers and rerecorded the results in a process called “re-airing”, a technique used for many years in the film world. Compared to digital processing this is a very labour intensive approach, but the ear immediately recognises the results as “real”, so the effort is often more than justified.

By far the biggest component of our work was spent on the historical blackbox recordings of life aboard the aquatic facility in which the player finds themselves. Predominantly made of conversations between the crew, these recordings provide insight into the backstory of the game. The initial direction we got from the team was toward the style of a period radio play, and this most accurately describes their function in the game. They operate as live action, casting the player as a silent witness to past events, and as historical documents. The dramatic narrative and the locational positioning have to be conveyed simultaneously.

o support the narrative, many of these recordings play back in stereo, which draws them outside of the world slightly. A major focus became describing the different locations of the characters. One might be in a diving suit underwater, talking to a dispatcher in a small dry room, via a submerged intercom. Successfully enunciating these differences was very much a team effort. We received amazing foley tracks from Tapio Liukkonen, which took the conversations from being a collection of disassociated vocal recordings and gave them character and a physical presence. All this was then processed to fit the device it was playing through, which was in turn given the reverberant character of the room in which it was being emitted.

This process could happen multiple times when numerous locations, emitters and recording devices were present in the one scene. Often one speaker would be run-down, whilst another in the conversation was new at the time the recording was made.

A huge array of tools were employed to get the right tone for these recordings. Often we turned to more traditional analogue processing such as guitar pedals, outboard compression, tube saturation, analogue filters, tape delay and some very dusty, old digital effects units to give us the fuzzy, squelching distortion we were after. As much is it’s fun plugging in the “toys”, this gear was vital in imparting authenticity to the sound….still, I won’t pretend it wasn’t fun.

Of course, a huge amount of back-end work went into ensuring the processed dialogue and Foley behaved correctly in game. Tuning the various behaviours and in-game effects is very much the glue that ties the audio to the world and makes it believable in an interactive environment.

Looking at the project as a whole, our goals were to impart a sense of history, to communicate the drama of the backstory, whilst at the same time give life to the technology and inner workings of their surroundings. Suits, speakers, microphones, broken cables and half heard conversations, all with their own unique character, but also needing a strong sense of consistency across the game.

Hopefully we have achieved this and added something positive to the project and the experience of the players.”

Because of the approaches we took, the final SFX count for SOMA is slightly eye-watering, clocking in at a little over 18,000 SFX files (not including voiceover and music). SOMA was a fantastic project for us to all to work on, we were extremely happy with the end result and we hope you enjoy listening to the game as much as you do playing it!