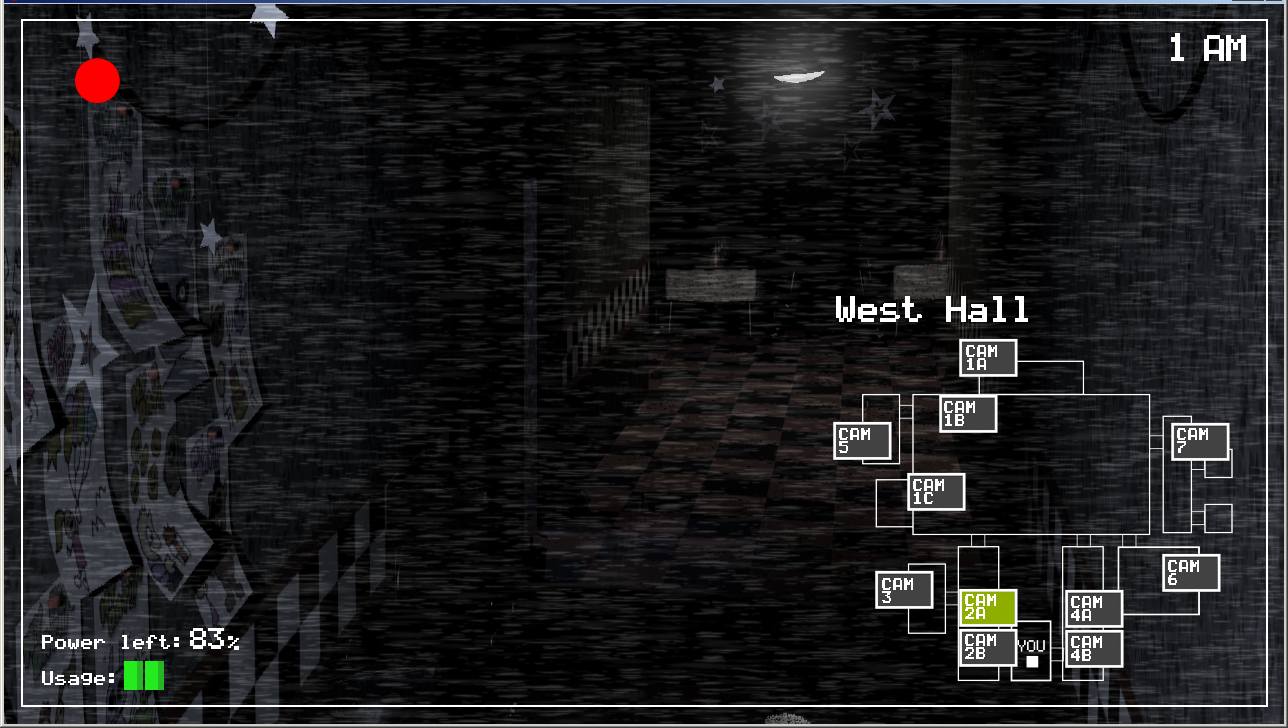 Here are my top take-aways from the game:

Just about all horror game games revolve around the protagonist moving around. It’s a core part of the game. Not so in Five Nights at Freddy’s. Here the player is unable to move around at all. Instead, the game is all about observation and seeing how other creatures move about.

As I’ve said in a previous article, traversal can be problematic. So it’s very interesting to have a game that solves those issues simply by ditching the entire concept. The lack of traversal also helps the game to have a more nightmarish feel and further simplifies the gameplay (more on that later).

Great use of sensory deprivation

In my previous post I talked about how it’s really helpful to put the player in the right mood by not overwhelming their focus. Five Night at Freddy’s is excellent at this. The game is so simple and there really isn’t much for the player to do apart from observing. This means that you have plenty of mental capacity left over, and all of that is put into simply being worried. This fuels all sorts of paranoia.

Tight connection between story and mechanics

While the setup is quite silly, one has to applaud just how connected the systems and narrative are. As the background story of the game is told you also learn how to play the game. They are really one and the same. There are very few narrative games where this is true and it means your mental model of the game is almost entirely built in narrative terms.

At first it’s almost impossible to figure out how the animatronics behave and you simply have to rely on intuition. The thing is that your intuition is pretty good at letting you survive, but not so good that you start understanding any underlying systems. When you hear particular sounds, you’ll want to close the door or turn on a light, and in many cases you are doing just the right thing. But as these intuitions are not based on simplistic systems, you are driven to mentally model the various creatures as living things. Just like the previous point, this makes your mental model much more story-like.

In Five Nights at Freddy’s there is always a jump-scare right before the game ends. This weaves a very tight connection between “failure” and “being spooked” allowing these things to reinforce one another. This really helps to increase the tension as it provides feedback both in terms of mechanics and by giving you a painful experience. This makes you not want to fail at the game, which ramps up paranoia and other things described earlier.

Five Nights at Freddy’s is also unique in that it puts all of its focus on the things that happen before an encounter. This is quite rare in videogames where much of the gameplay happens once a monster starts coming after you. But in most horror movies and books, much of the narrative revolves around what happens beforehand. This makes sense, as a lot of fear comes from anticipation. Just take a look at movies like Ringu, where the entire story is build-up for a proper encounter in the end.

This game works pretty much like that. When the game goes your way, you never encounter the monsters. In fact, the moment there is a monster encounter the game is over. I don’t think any other game has done a better job at emulating this way of building up a horror story.

Finally, the game is also great at causing moments of horror to emerge from its systems. Five Night At Freddy’s doesn’t script specific situations, but it sets up systems which will allow them to occur naturally. To me this is one of the foundational aspects of really good interactive storytelling. My own favorite moment:

It was just a few hours before the night was about to end, and I was getting really anxious. I heard a footsteps but couldn’t really figure out where they were coming from. I scanned the camera feeds and couldn’t see anything. The sounds died out and an eerie silence replaced it. The night was almost over and I saw that my power was nearly exhausted. I decided to a small amount of it just to make sure that nothing was outside the window. The moment I turned on the light I saw this rat creature, just staring at me. My entire body froze.

In that moment it really felt like I was taking part in a horror movie. I built up most of the tension myself and then it was a dynamic system that made the crescendo happen. It felt amazing.

Five Nights at Freddy’s is far from a perfect game, of course. My biggest problem is that it gets boring fairly fast. The scares stop being scary after a while, and once you understand how the systems work your mental models becomes a lot less interesting. For me it took a less than an hour before I felt I’d had enough of the game. Much of that hour was really, really good though.

It’s also worth noting that I’ve written this about the first game. I’ve played two of the sequels, but didn’t think they were as good as the first.

In any case, if you haven’t played the game yet, I highly recommend doing so. It’s great while it lasts and there’s a lot of great to design to inspire you.