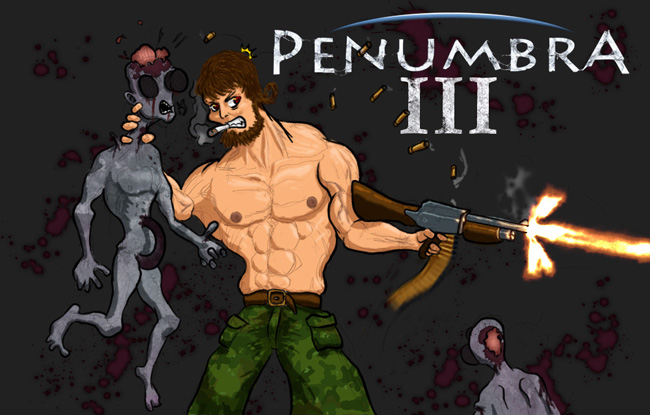 Posted on Posted on 1st April 200829th November 2019 by frictionalgames in News, Penumbra

Penumbra 3 : Back With a Vengeance to be released worldwide Q1 2009

Helsingborg, Sweden – Frictional Games proudly announces the release of the third game in the Penumbra Series, named “Back with a vengeance”. This highly anticipated chapter in the Penumbra story will have the protagonist making a final stand against the alien threat faced in Black Plague. “We really thought that the last game ended in a rather lame fashion and wanted the series to go out with a bang!”, says co-owner Thomas Grip. “And what better way to create a bang than with an action-filled blood soaked ending! Everyone loves explosions and we feel that we need to cash in on that too!”.

The game starts out as Philip awakens in a dark basement. Dazzled and confused he starts doing the only thing he can – pumping those muscles! By using his engineering skills he starts building one badazz gym and make sure no aliens will mess with him anymore. Full off steroids and 110% raw muscle strength, Philip sets out to destroy the alien threat with machineguns, bazookas and hand-to-hand techniques!