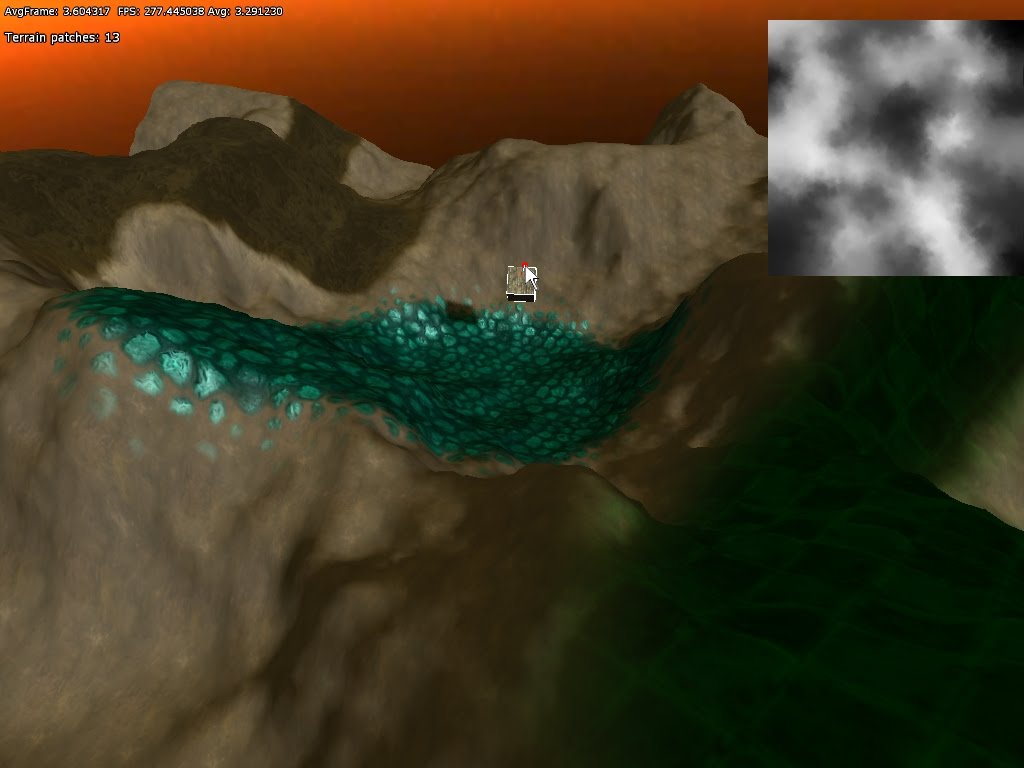 When I thought that all problems with heightmaps was over, I stumbled upon something sort of tricky recently. The only thing I had left for heightmaps was to add physics to them. This seemed easy to do as it was basically just a matter of sending the raw heightmap data to the physics engine (newton game dynamics) However just as I had done this I realized that this was not enough: the terrain could have many different physical properties at different places (a spot with dirt, one with rock, etc).

The thing is that in physics simulations you give a material per shape, each material having certain properties (friction, etc) and special effects (sounds, etc). The heightmap is counted as a single shape, and thus it only has a single physics material. This was something I had totally forgotten. Luckily, the physics engine supports the assigning of special properties to each point in the heightmap. Once I found the proper info, it was pretty simple to add this (see here).

Now it was just a matter of adding extra material values to the heightmap (basically just an array of single integers, the id of the physics material at each point). My initial idea was that this could be “painted” on as an extra step, and to be sure I asked Jens what he thought about it. His reaction was that this would be way too much work and wondered if it could not be auto-generated instead. We already had a physics material assigned to each render material, so the basic info was easily accessible.

However, when I started to thinking about this, I found the actual auto-generation increasingly tricky. How should we determine which of the many blended materials to set the physics properties (blending was not possible)? Also, how do I get this information, considering that the blend textures can saved as compressed textures, into a CPU buffer?

The way we chose to solve the material picking was that the top visible (meaning over a certain limit opacity) blend material always sets the physics material. This allows map creators to set priority on materials in terms of physics, by simply placing them at different places among all blend materials. For example, if a material like gravel should also have its effects shown no matter what it is blended with, then it should be placed high up in the list. While currently untested this seem pretty nice and can also be tweaked a bit (like having something else determining priority).

The generation of this data was made by rendering the blend textures to an off-screen target and then grabbing the data into normal memory. What this meant is that the GPU would decompress any packed textures for us. This also solved some other problems, like the need to resize the texture according to heightmap resolution. Once the data is grabbed from the GPU it is just a matter to loop through it, check values and write to the final buffer.

With this little post I hope to show that there often is more to a problem than what is visible at first. Also, this shows another advantage of using normal texture splatting (more info here), instead of megatextures or similar. With the auto-generation of physics, it is much easier to create and update the terrain, something extremely important when you are a small team like us.

Would be very interesting what other techniques people use (or known of) for setting up physics properties on terrain!