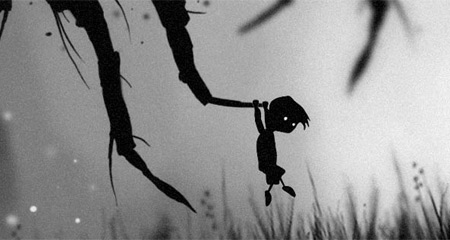 A while ago I played through Limbo for the first time. I thought it was quite an interesting experience for many reasons and been thinking for it on and off. Now that I have collected most of my thoughts on the game I thought it was time to write a little post about it.

Starting off, I thought the game had really nice visuals that really added to the mood. Small things, like the change in light level and tilt of the camera heightened the mood substantially. Another thing I really liked was the variety of activities and lack of puzzle repetition. Too many games just try and extend play time as long as possible, and it is nice to see games going in the other direction. All this has been said before though and is not what this post will be about. Instead I want to discuss some other things I realized when playing the game.

I think the biggest take-away from Limbo is how you do not have to give the player lots of actions in order to make a fresh and interesting experience. The basic actions in Limbo are move, jump, climb and grab. These are then used in a mixture of ways, constantly keeping the experience fresh by putting the variety in the world instead of the controller. This can be seen in other games like Shadow of the Colossus (but then to a lesser degree), and I think it really helps to heighten the player’s feel of presence in the game. It only takes the player the first few minutes of the game to familiarize with the controls and the rest of the game can be spent on building up immersion, instead of constantly learning and remembering controls.

It is so often that games become about the mastery of the controls and I think that makes it so much harder to become one with the game’s world. The faster the flow of interaction from player to game can become intuitive, the better. We do not want players to think of what buttons to press and sticks to pull. Instead we want players to directly express their wishes from mind to game, unaware of any intermediate hardware.

As I played Limbo I realized that most (if not all) interactions were directly added to the puzzles you have to solve. I felt that there could have been tons of extra elements to interact with in order to make the player feel more connected to the world.

But then I realized that the design of the game went against this. The puzzles in Limbo depend a lot on experimentation and thinking “out of the box”. You have to try out every object in order to find a way to progress. If the game had had superfluous elements, then this would have made the experience so much harder. Players probably would have spent much time interacting with objects that were completely unrelated to the puzzle they were trying to solve, increasing the overall frustration and damaging the flow of progress.

This means that puzzles can be quite a hindrance if you want to make a living world. If the player’s goal is to solve puzzles, then that forces you into make sure the rest of the experience supports this. And because of this having puzzles excludes a lot of things that could increase the player presence, emotional connection or just about anything that might work against the puzzle solving.

This is one reason why we will try to completely remove puzzles for our upcoming game (more on that in another post).

I just have to mention the trial-and-error nature of Limbo as it is something that I have talked a lot about before and it is quite a prominent feature in the game. First of all, the “repeat and try again” mechanic that is used in almost every puzzles is something that ties into the general design of the game. It is quite clear that it takes the basic design from Another World but I link Limbo is a lot less frustrating.

What I found interesting is that the most annoying parts were not the puzzles where you died and had to restart, but where you missed some part of a sequence and had go back and try again. This mainly because the latter meant you had to redo a lot more and the deaths often had a sort of fun, morbid “gotcha!” mentality to them. Also when the world is reset and the game place you at a certain point you get a greater sense of focus on and a hint that you are on the right track. Just failing to do something always give you that nagging feeling that you might not have set up everything in the proper way.

Still, dying or not, for every time I had to repeat a part of the game, it became less about being present in it’s virtual world and and more about figuring out an algorithm. I felt a clear change in my state of mind after just one or two attempts at a section. I am probably a biased here, and thus not best of test subjects, so would be interesting to hear what others felt.

A final note on this: Some people have argued that the cruel death mechanic heightened the tension in the game. However, I think the most important part of creating tension in Limbo was that you never know what to expect next. I never felt any increased tension after having failed once or twice, but instead my greatest tension was from anticipation. Coming closer to some strange branches or a weird contraption, my mind conjured up all sort of imagery of what could happen next. I think this sort of build-up is a lot more powerful, than simply adding cheap engagement from the knowledge that you had to restart (which rarely worked on me anyways).

The last part I want to discuss are the cut-scenes, or more precisely the lack there of. It is still so common in games that you remove control from the players and then pan/zoom/guide the camera to make sure that the player watches some event (e.g. a creature emerging).

Limbo does not do this, and it makes the events that you see so much more compelling. By using the game’s space and character movement as a means of pacing, the events are very well directed, but without ever removing control from the player. I especially liked the villagers that you see running about and thought it was a shame that they were not utilized more. I would have really liked for a more coherent narrative to have come out of these encounters.

Despite being mainly a game about solving puzzles, I think Limbo gives a lot of hints on atmosphere and narrative in games, both by things that it does good and things that it fails at. I also wish that we could see games with this kind of polish and interesting art direction, that had main focused on creating immersion, atmosphere and a compelling narrative. As seen when investigating games like Limbo, all the tools for creating truly expressive experiences already exists, it is just a matter of putting them to go use!