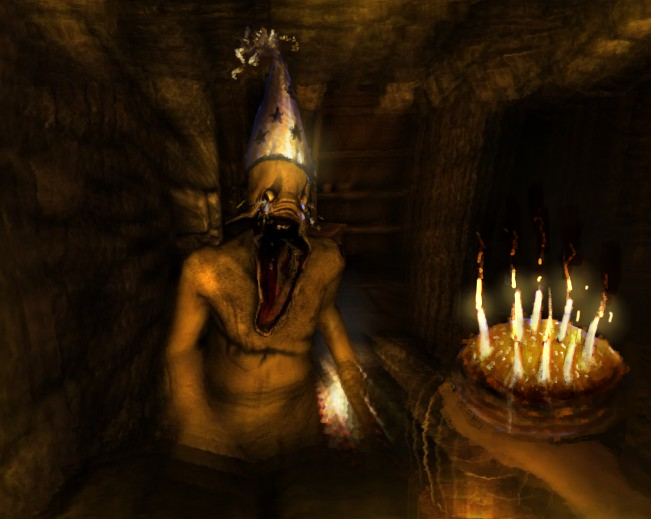 A year has passed since we first released Amnesia and a lot has changed for us at Frictional Games since. We have gone from being pretty much out of money, to being financially stable in a way we never thought we would be. Everybody in the company has gotten raised salaries and we have more than enough money to complete our next game.

Our financial situation is far from the only change though. The success of Amnesia has led to us getting a lot more known among players and the press. Reactions to the game are still pouring in, and it feels extremely good and humbling to be able to have that kind of impact on people.

With that little summary, now let’s get down and dirty with some more detailed information. (And oh, see end of post for a wee surprise.)

Let’s start with what most people probably are the most interested in: how many units have we actually sold? During the GDC EU lecture I noted that we were now above 400k units total, but as we scrutinized all of the figures it turns out this was not quite correct. Jens did a recount of all income we have gotten so far and the figure ended on 391 102 units (which is of course not correct when you read this as the game sells at about 2 mHz).

This sounds like a huge amount for sure, but there is something to consider with this figure. About 75% of all the sold copies, that is 300k, were on discounted sale. This is quite substantial really, especially when you note that a good deal (almost half) of the remaining 100k were sold at launch. In the end this amounts to around 50% of all our earnings coming purely from discounted sales (most at a 66% or higher discount).

While discounted sales indeed dwarfs our normal sales, the day-to-day sales are quite expectational as well. Right now we are selling around 6000 units per month at full price. This is actually more than enough to cover all salaries and operational costs for each month, which is a situation we still have not really gotten used to. Another interesting fact is that monthly sales have actually increased, they are almost double now from what they were half a year ago. What all this means is that we can work with a healthy buffer that makes it possible to take more risks and down the road spend more money on outsourcing for sound, voices, art and more. Both of which should allows to make our next game as good as possible.

The distribution between platforms depends a bit on how you count it. In our own store it is as follows:

However, our store is the only one that sell a Linux version of the game, so in total sales the percentage of Linux is a lot less. When looking at other stores the distribution is around 11% Mac and 89% Windows. The Mac percentage goes down a bit during sales, where Windows sales increase 3 times or so more compared to the Mac ones. An interesting note here is that Mac sales in our own store did not go down as a other online outlets like Steam started to provide mac versions; meaning it did not steal our customers but opened up to a new market. We think it is a good incentive for other stores to support Linux as well!

The final data regarding sales is the difference between physical and digital sales. As of now, a total of 35, 000 boxed copies of the game has been sold, or around 9% of total sales. This is not too shabby considering we had no release in Europe and that the American box came out half a year after launch. The money earned from a physical unit is much less than from a digital one, but a physical release can still be helpful (however, other problem arise that might make it not worth it, something we will cover later on).

As Amnesia gained popularity, we already had our Penumbra games up for sale. We were quite curious in seeing how these sales would be affected by Amnesia’s success. As Penumbra is quite similar to Amnesia i terms of gameplay and mood, and that both were made by the same company, we thought that we would see a boost in sales and attention for Penumbra. Turns out that Penumbra was almost not affected at all.

The number of monthly visitors for Penumbra are still the same as they were before Amnesia. Same with sales; the monthly total is still a little above 500, which it has been for over two years now. The only influence Amnesia could have had is to keep the average up.

So why did Amnesia have no (or very little impact) on the sales of Penumbra? We think one reason is that main bulk of Amnesia buyers simply does not connect the two. While they are similar, the first look is quite different. Penumbra takes place in present day and Amnesia in the 19th century. Another reason is that whenever there is some exposure for Amnesia, Penumbra is almost never mentioned, so most people that enjoyed Amnesia never learn there is a similar game available.

I noted earlier that the daily sales have gone up over the last year, and large part of that has been due this – responses from the players. Still now, a year later, once a week or more some new post about Amnesia goes up on reddit, youtube or a similar user generated site. This kind of constant bombardment of Amnesia related material has continued to raise awareness of the game.

The major example of this would be the the Amnesia WTF video that reached 4 million views before YouTube, because of mysterious reasons, removed it (here is a copy). Others include this pug picture that managed to spread quite virally, images like this one, and much more.

Another pleasant surprise was the amount of custom stories that have been made. In Penumbra we only knew of a single attempt to make a user-created level and that one was never released in public. For Amnesia at least 300 custom story projects have been started, and 20 or so have actually become completed, high quality, experiences. There has even been a Tetris clone made with the tools!

This surge in interest has made our community a lot more active too. A year after we released Penumbra: Black Plague, our forum was quite dead, having a post every other day or so. Right now we average about 200 posts / day, and all of it is pretty much thanks to the custom story creation. This has also spread to other parts of the forum, and there is a lot more general chatter, technical help between users, etc . It really shows that supplying users with creation tools is well worth the time.

The making of Amnesia

As a year has gone by a few resources on how Amnesia was made has popped up, so it seems like a good time to sum them up now:

The Terrifying Tale of Amnesia

A post-mortem of Amnesia at the Escapist, that describes what we went through when creating the game. It mostly deals with the financial side, but also on how corporate decisions lead to changes in design, screwed everything up, and other juicy stuff like that.

The Post-mortem is now also up on our site.

Birth of a Monster

The design and production process of the grunt monster, written by several of the people involved. Don’t forget the other parts.

Evoking Emotions and Achieving Success By Breaking all the Rules

A talk I gave at GDC Europe about a month ago. It goes over a lot of the design decisions that went into Amnesia.

So what is next for us at Frictional Games?

First of all, we want to get up to speed on our next game. Since we spent all resources we had on getting Amnesia done, we had to start the new project without any sort of momentum. Added to this was the potato thingie that also took a lot of time (but was really worthwhile). This has lead to a discrepancy between design, technology and art that we just about caught up to now. We have done a lot of work on the next game, but it is not until now we are close to having a nice work flow.

Because of this, a major issue for us to fix is to be able to manage multiple projects. We want to have a nice reallocation of resources at the end of each project and make sure to keep the flow going. However we do not want to grow the company too much, and thus we are looking into other avenues. If everything goes as it should we will announce our first stab at a solution to this quite soon!

Another big change for the future will be consoles. The main reason for choosing consoles is purely financial. Right now our main income comes from very few channels, and we need to spread out the risk somehow. The other reason is that we feel we are missing out on exposure by not being on a console and not reaching as many players as we should be able to. Unfortunately consoles are really old compared to the PC right now, so it will be far from straightforward to develop for two platforms. Our current thinking is to make the console get a lower end version and make sure console specs influence the PC version as little as possible.

Finally, in regards to what our next project is about, the basic idea is to use lessons learned from Amnesia and then take it to the next level. We have mentioned before that the next game will not be as horror focused as our past ones, but still have a scary atmosphere. Our intention this time is to dig into deeper and more intellectually demanding subjects. Another goal for us is to get past having classical puzzles that break the flow, but without making the game into a spoon-fed type of experience.

We are all really excited about the future, with tons of ideas we want to try out and now with the resources to do so properly. This is the first time for us developing a project that we know we can fund all the way and not worry about tight resources. It will be very interesting so see what will be possible to create this time!

Anything else you want to know? Well, you are in luck because the entire team will be available for an Ask-Us-Anything at Reddit! Just go here:

It is really simple to register at reddit, so just do so and fire away in case you are curious! And do make sure to up-vote it so it gets some exposure!

And finally, thanks to all who have supported us, pre-ordered our games, put up crazy stuff on the internet, provided help in the forums and in other ways helped to spread the word!