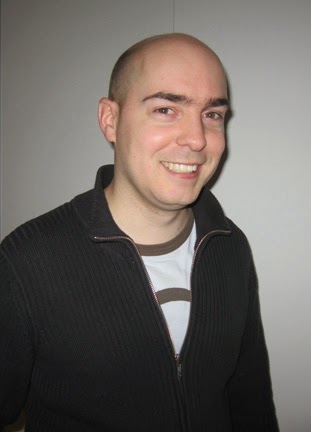 I’m Marc Nicander, I started working for Frictional Games as a freelance artist back in 2006 and got hired full-time when development on Amnesia started in 2008. When I was freelancing I was still a student so I did my work in my 13 square meter student apartment but I have since managed to get a larger space. This is what my current workplace looks like.

My first real contact with games was back in 1989 when my parents gave me a NES for Christmas. It was the most amazing thing and I spent countless hours in front of the TV playing games like Super Mario Bros, Zelda and Megaman. It also made an impact on my other hobby, drawing. My drawings changed from being things inspired by comics to mostly being Nintendo characters and home-made Megaman bosses.

When I was in 9th grade I got hold of 3D Studio Max and started playing around with 3D for the first time. I remember it being quite confusing – it wasn’t easy to figure out how everything worked on my own. I got together with a friend who knew C++ and we managed to make 2 games. The first was an adventure game with pre-rendered 3D backgrounds, the second a shoot’em up that we entered in a PC Gamer competition. We didn’t win anything for it, and working as a game developer in the future felt like a far-off dream.

So, instead, I went on a Media Technology course at Karlsham to study 3D, where I learned Maya, film-making and video editing. While on the course, I discovered a different programme that hadn’t been listed when I first applied, a 2-year course called School of Future Entertainment (SOFE) that focused on games programming and 3D for film and games. After my 3 year of Media Technology I applied to SOFE, and it’s there that I first found out about Frictional Games.

One night when I was working late on a school project a friend, Emil, called me over to his desk. He had been working late nights on a secret project. We were the only ones left there that night, and he wanted to show it off to someone even though he wasn’t supposed to. He was doing models for an extension to the Penumbra tech demo, and to say I was amazed is probably an understatement. The way the game used physics for all the interactions was beyond anything I had experienced in any other game at that point, and it got harder to play other games afterwards when I knew what was possible.

When Frictional started building Penumbra they needed freelance artists to create in-game models for props, and this is where I started my Frictional career. I created 3 objects for Penumbra: Overture: a flare, a lock and an engine. I continued freelancing during the development of Penumbra:Black Plague and worked mostly with props but also built some of the levels. After Black Plague was released work started on the HPL2 engine and I was tasked with building levels for the expansion Requiem. We had feedback complaining about Black Plague’s levels mostly being a series of boxes on a single plane and my main goal in Requiem was to fix that. It’s one of the reasons why the third level in Requiem is all about climbing.

When development on Amnesia started in 2008 I was hired full time and I was happy to finally have a secure income. Little did I know what was waiting around the corner…

I’m one of the four 3D artists working at Frictional Games. My work is to create the world described in the design documents. This means creating a lot of props, making textures and creating levels. I still do most of my 3D work in Maya but thankfully I no longer have to build full levels in it like I did when I was working on Penumbra:Black Plague.

To further illustrate what I do for those of you who aren’t in game development, I’ll show you an example of how I make a simple prop. I start out with a basic object, in this case a cube. As you can see in picture A, the cube is built with planes between vertex-points. By adding vertices and moving them around as seen in picture B I can shape the cube into anything I like. If I add more basic objects and modify them I can end up with the result in picture C.

When I’m done with the basic object I save it as a low poly (low detail) object and start adding more details to it. This new model will become the high poly (high detail) object you can see in picture D. We’ll use this highly detailed model to trick the viewer into believing that the low poly object in the game is more detailed than it really is. We’ll show examples of this in our upcoming artist blog posts along with level building and concept artwork.

(Note: Model is not from SOMA…)