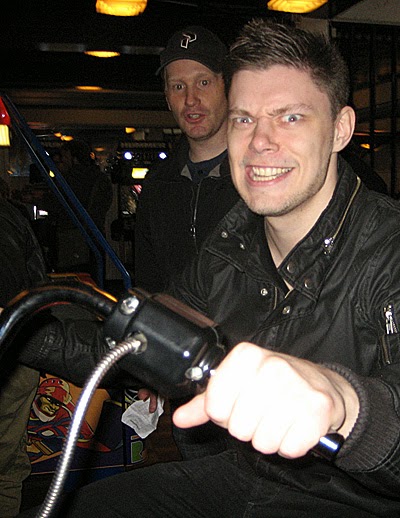 Posted on Posted on 10th January 201417th December 2019 by frictionalgames in Blog, People of Frictional

Hi! My name is Marcus Johansson and I’m a 3d artist who’s been with Frictional Games since January 2009. When I think of that date it doesn’t sound that long, but then I realize it’s actually 5 years ago.

I started as an intern for 6 months, and after that went straight on to full time.

For most of this 5 year span I’ve had to work in a corner of the living room, but I finally moved into a 3-room apartment a year ago. Having a dedicated office really helps at home as my other half doesn’t share the same working hours as me.

I’ve always been curious about how things work. At a young age seeing my step dad fixing anything from broken electronics to cars really got me hooked on figuring things out and trying to fix and create stuff myself.

I didn’t have a gaming system or computer at home when I was small, but I played NES/SNES at my friend’s house every chance I got. It wasn’t until I was 12 that I saved up to buy my first gaming system, a Playstation that I spent most of my time playing FF VII and THPS2 on.

At 15, after finding odd jobs here and there and managing to save up enough cash, I bought my first computer, managing to build it from parts without breaking anything. Although not a single physical part is in my current computer it still feels like it’s the same one, as I’ve made incremental updates ever since.

In high school I managed to make a few games in Flash by myself, but later teamed up with a programmer friend and we managed to make a few multiplayer games. We had a Flash gaming site with a working community system up and running for a while, even managing to get a few hundred members, but we didn’t take it much further.

After school I found a course at a large university targeted towards game development. As I didn’t know much about gamedev aside from my Flash/web experiences, I jumped in with both feet without doing much research. Turned out that the course was just an assembly of modules the university had been running for years already; they’d slapped on the game development tag to lure students in. I wasn’t learning anything that would get me into the industry.

I realised my mistake and did some proper research, finding a much better programme called Gamemaker that had the art and programming aspects separated. I applied to the art course and got accepted.

I started off in September 2007 and focused on modelling and texturing. The course and teachers were good but it was up to you to make the most out of it. It would have been easy just to pass, but I wanted more than that, so along with a few other students I stayed at the school late at night trying to get good at this thing. The fact that I’d wasted almost a year of my time and student loan on a bad course made me more serious about getting it right this time.

All this hard work finally landed me an internship at Frictional Games after graduating and I’ve been here ever since.

Since I got my foot into Frictional’s basement I haven’t touched my portfolio at all. It’s still up at www.hadex.se with the stuff I showed to apply for the internship. There are only 4 images, but I figured that it’s better to show a few good things than lots of average ones. Keep it short and honest – at least that’s what I’d want to see. Same with the letter you apply with; show that you want the position but don’t use too much grease or it will feel cheesy and dishonest.

(Looking at these images today with a lot more experience, I wouldn’t keep any of them for my portfolio!)

So – if you are looking to get into the industry make sure you find a course that has actual game-making modules on it!

I’m one of the 3D artists at Frictional Games and I do a little bit of everything on the visual side – except that I can’t draw. If there’s someone else out there that can’t draw like me, you can still make it as a 3D artist as long as you have a good eye for things and are willing to learn and work hard.

I remember that back when I started here I thought some of the deadlines for the early Amnesia development were very stressful. If I could talk to that version of me today I would tell him to enjoy that nice and relaxing time. But I guess he would be too arrogant and wouldn’t listen anyway!

Back then I’d get a task to create a batch of 2-4 different models in the same style along with their measurements and sketches. An example task might be to create a large table, a small table and a chair all as a set. Then I’d just have to model and texture those, and then move on to the next batch.

Although I’m still modelling and texturing smaller props it’s now only a small portion of my responsibilities. My main job is to build levels based on an initial design. This usually means that I end up creating modular assets like walls, ceiling, floors, pipes, cables and so on; creating gameplay and story-driven objects; adding detail objects; creating particle systems; creating decals; and making smaller rigs and animations. I send out requests to our outsourcers for extra models and 2D art that I know I won’t have time to do if I want to get the level built. I also talk with the animators that we contract to for larger animations.

It can be stressful to try and deal with all of this at the same time, especially as our levels are bigger and more fleshed out than ever before. But this range of tasks is what makes the job so varied and fun for me; your work can be completely different from month to month.

At Frictional we start by focusing on the most important story and gameplay aspects of each level, but at the same time I like to get in a bit of lighting and add some particles in order to spice up the visuals whenever I can. You don’t want to leave all of the polishing work until the last few weeks!

Thomas puts a ton of work into designing the levels, but it’s up to us 3D artists to kick off this vision and make it into an environment that you can walk around in. You start with a huge level design document and are not really sure where to begin at first, but once you get going and the level comes alive piece by piece it’s a great feeling. You get the ‘this is my level’ feeling after a while even if the initial design isn’t yours. I prefer it this way as each level ties perfectly in with each other and the story, instead of having each level builder also be the level designer.

There’s a quick insight into what I do in the company.

I usually don’t write these sort of things but I hope it was a decent read for you.