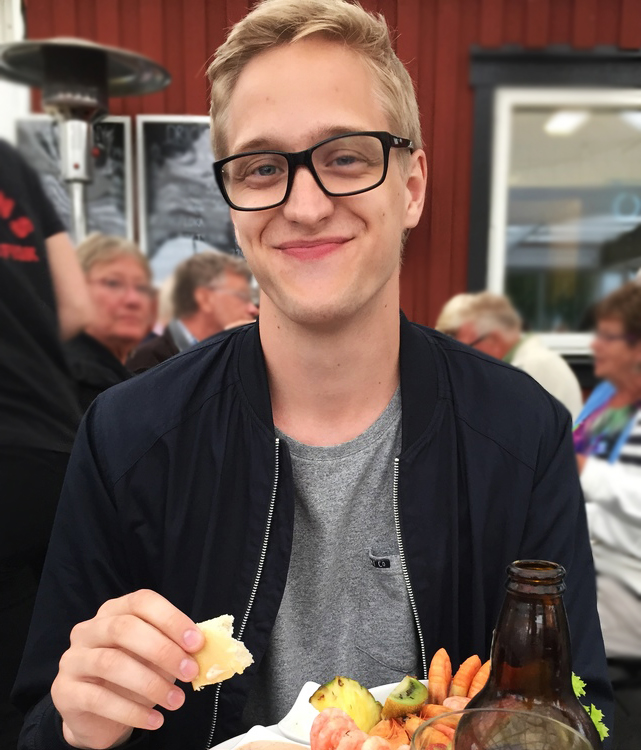 Posted on Posted on 28th February 201819th December 2019 by frictionalgames in Blog, Life at Frictional, People of Frictional, SOMA

I’m Max, and I do gameplay programming and design. I joined Frictional about a year and a half ago, and I’ve been working on one of our super secret projects since.

For the first nine months or so I, like everyone else, worked from home. Last summer we got an office set up in the heart of Malmö. Since then the amount of days I spend working from home has reduced greatly, though I still do it from time to time.

These are my two workspaces, the first one in the office and the other one at home (which is rather bare bones right now, moved in just a couple of days ago!). They’re quite similar; both the computers and the chairs are the same kind. I wanted to be even more consistent and get the same type of desk as the office one at home, a decision that was ultimately overruled by my better half (apparently it doesn’t go with the rest of the decor).

Games have always been a big part of my life. Most of my time growing up was spent either playing games or talking about games. But, for quite a while, my family didn’t have a PC. Which meant I was stuck playing all sorts of old, weird games on rapidly aging Apple computers. One of my earliest gaming memories consist of repeatedly failing at air-hockey, losing to a hideous pig-man in Shufflepuck Cafe on my dad’s old Macintosh.

Eventually I scraped together enough money to put together my first PC, in front of which I would stay rooted for the following years. In addition to playing, I spent a lot of time creating custom content for games with my friends. It was always quite basic though, as I hadn’t learned any programming yet.

For a year or so I studied film and media studies at the university, with a diffuse goal of wanting to work in games down the line. One night my girlfriend gave me a push, and I applied for a three-year game development program at Blekinge Institute of Technology (BTH).

My years at BTH were a mixed bag. On one hand, we had a lot of freedom and got to work on tons of small projects, which was very fun and super rewarding. On the other hand, some courses felt like they were only marginally related to game development. Working on side-projects during your spare time was crucial. I got through it all by finding a good group of like-minded students that I stuck to for the entirety of the education. Our final project was a side-scrolling adventure game called Far Away – you can watch the trailer for it on Youtube.

Perfectly in sync with graduating, I stumbled across a job opening at Frictional and sent in an application. Over the following weeks I answered some additional questions, did a work test and finally had an interview. A couple of days before I would hear from Frictional, I got a job offer from another company in software development. I clumsily explained to them I was waiting on another offer and asked for a few more days. Finally, I got an email from Fredrik and Thomas offering me the job. It was a no-brainer, and I happily accepted.

My first few weeks at the company consisted of completing a list of introductory tasks, to learn more about the tools and the engine. This was a lot of fun, and culminated in the creation of a silly mini-game where I got to put everything I had learned to the test.

After I had completed the introductory tasks I got to work on Safe Mode for SOMA, which was something I was really excited about — contributing to a game I truly thought was great. From the get-go, we felt it was important to maintain the monsters’ threatening presence in order for their new behaviours to gel with the overall tone of the game. We couldn’t just disable their ability to harm you; doing this would end up breaking immersion (imagine repeatedly throwing a toolbox in Akers’ face and him just standing there, taking it). Instead, we tried to focus on how to best tweak each monster’s behaviour in a manner that suited that particular encounter. For instance, some might eerily walk up to you and size you up, and can even bluff charge you if you’ve strayed too close. To further enforce the behaviours fitting with the world, we decided that if you were to actively mess with monsters (like invading their personal space for too long, hurling trash at them and so on), they should still be able to hurt you, just not kill you. Overall it was a very worthwhile experience, and I’m quite happy with how it all turned out.

Now I’m working on one of our secret projects. As the gameplay programmer/designer workflow has already been described in previous posts I won’t go into detail, but my days in general are spent designing and scripting events and scenes, as well as programming gameplay systems.

Additionally, I thought I’d talk a bit about the differences in working from home compared to working in the office. We’re also gonna do a proper office tour later on, so stay tuned!

This is our office! Currently, we’re around seven people occupying this space, probably with more to come. It’s quite seldom all of us are here at once though, but there are usually a few people around. And on the off chance that you’re here by yourself one day, fear not; there’s always the noisy, seemingly stiletto heel-wearing, tap-dancing travel agency crew upstairs to keep you company (seriously).

So, it really isn’t all that crowded here. But, seeing as most of us don’t work from the office, we often have meetings over Slack. It can easily get annoying for your desk-mates if you keep babbling on and on in various meetings throughout the day, which is why we’ve set up a separate meeting room. It also moonlights as a test room, complete with a TV, some dev kits and a monster webcam.

The fact that the company is split into people working from home and people working in the office could potentially lead to complications, such as communication issues. In order to prevent this we’ve made sure that all important decisions and discussions still happen over Slack, to keep everyone in the loop. So far this policy has worked well, and the transition has been quite smooth.

In the end, a typical day of work in the office is very similar to one at home. There is of course the added social aspect of working in the same physical space as you colleagues, which is great, but if you one morning feel like you’d rather stay at home and work, you can. Having this option every day really is quite luxurious.

Other than this, and the requirement to wear pants, the routines of working in the office and and working from home differ very little.