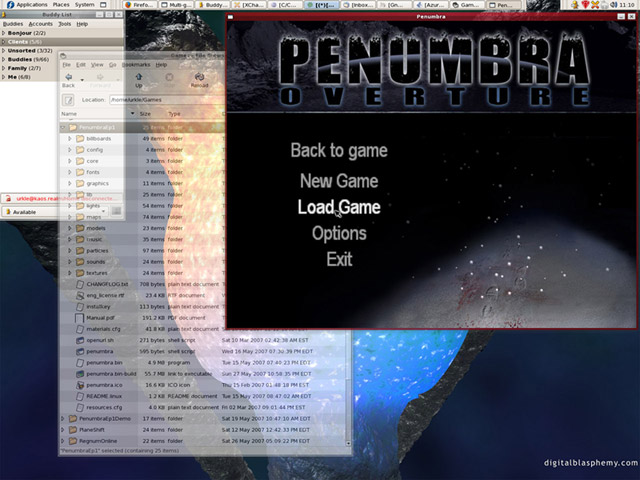 Posted on Posted on 30th May 200716th December 2019 by frictionalgames in Announcement, News, Penumbra

Recently we moved our office to a more Arctic location and took the opportunity to get ourselves a penguin pet. We put him through various challenging escapades, strange rituals and voila: We can proudly present the Linux version of Penumbra: Overture Episode 1.

Penumbra: Overture is a first person survival horror game, created by Frictional Games and runs on the internally developed HPL-Engine. An engine that is now cross-platform, soon to be supporting the Mac OS X platform as well.

The “port” to Linux has been developed by Edward Rudd, who can also take credit for the upcoming Mac release. The HPL-Engine has from it’s initial design process been developed with portability in mind, utilizing cross-platform technologies such as OpenGL, OpenAL, Collada and AngelScript. This has enabled the Linux and Mac development to go much smoother, making the Linux release possible soon after the Windows release. The Mac version is slightly delayed due to some unfortunate bumps in the road, but we hope to have overcome these in a not too distant future.

Penumbra: Overture is a first person adventure game which focuses on story, immersion and puzzles. Instead of using violence to progress the player has to use his/her wits to guide Philip on his quest to unravel the past.

Played from a first person viewpoint, Penumbra: Overture is very different from other adventure games. Not only is it powered by a 3D engine utilising cutting edge technology, it also has an advanced physics system which allow for a never before seen environment interaction. The player can open drawers, pull levers, pick up objects and more using natural mouse movements creating a highly interactive and immersive game world.

Penumbra: Overture will keep players on the edge as they have to explore scary and immersive environments never knowing what is behind the next corner. The world is detailed, graphical as well as a story wise making the player feel part of the world as secrets are uncovered.

Frictional Games was founded in 2006 in the city of Helsingborg, located in the south of Sweden. After having released the Penumbra technology demonstration in early 2006 and receiving a warm welcome from gaming communities all over the world, the possibility to turn the project into a full-blown game was to good to be missed.

Frictional Games is a small company with three people at it’s core creating the majority of the content and technology for the games. A network of external contributors provide additional resources in music, coding, writing and other specialized areas.