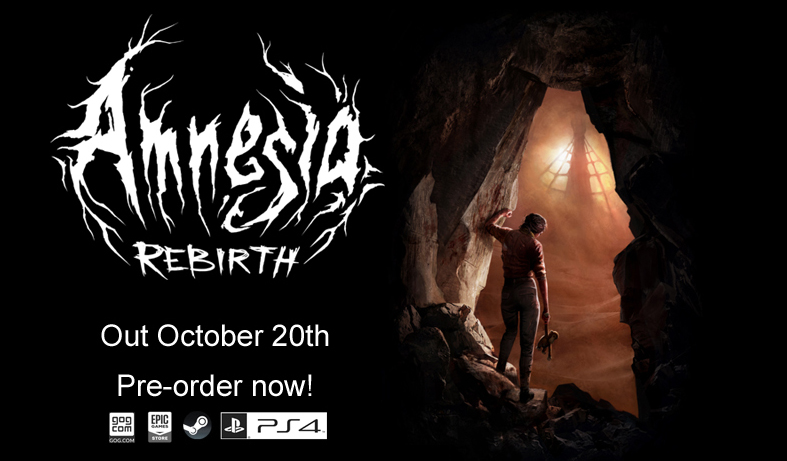 After five years of work we are finally able to announce that Amnesia: Rebirth will be released on 20th October 2020!

Check out the latest trailer here:

You can pre-order the game now, with a 10% discount, from:

When we first started on Amnesia: Rebirth, the idea was to work on a fairly straightforward and simple project. Our first plan had the game being released in 2017 or 2018. Obviously, that didn’t happen.

Instead the game grew in size and ambition. It went from being a game with a small scope to being the biggest and most ambitious game we have produced to date. Why so? The main reason is that as we worked on the game, we realized that we couldn’t make our own sequel to The Dark Descent a mere “side-project”. We wanted to make sure we incorporated all the lessons that we’d learned over the years and to expand on the loose threads from the first game.

The past 10 years has also seen a flood of new horror games, and we wouldn’t allow a new Amnesia game to simply be lost in the crowd. It had to stand out and to pave new ground. We couldn’t allow it to be anything less.

This sort of change in scope wasn’t without issues, especially as we were working on another, currently secret, project at the same time. But, finally, we got through it, and created a game of the quality we wanted. We’ve got to be honest, though: it took longer than we expected. So, to finally have an official release date nailed down feels damn good.

We’ll be giving out more information on the game over the coming weeks. In the meantime there are a bunch of hints that can be gathered from watching the trailer carefully. Uncovering those is left as an exercise for the reader, though…

So – we hope you enjoyed the trailer! Stay tuned for more information soon!