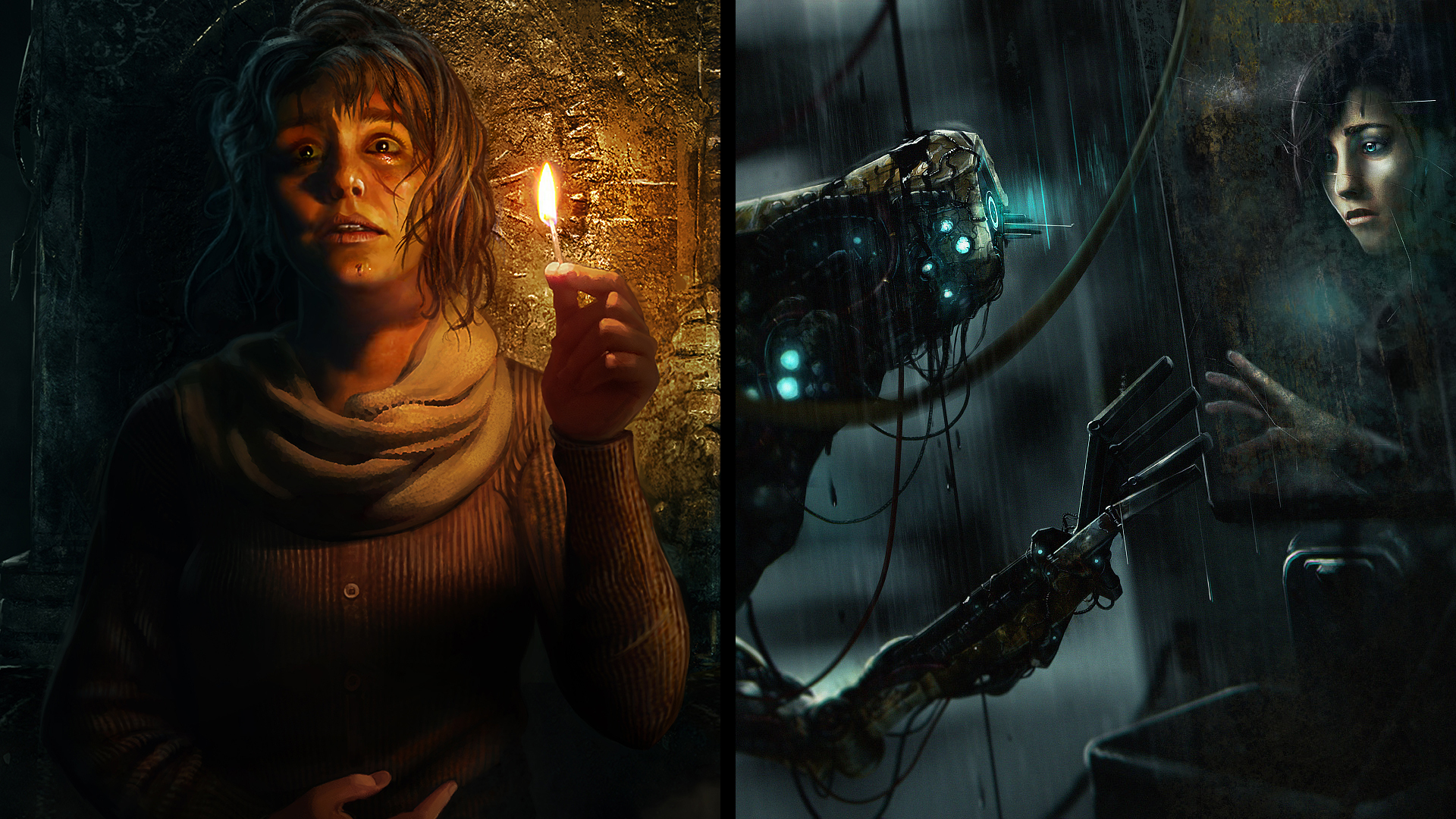 It’s now been nearly 5 months since Rebirth was released and it’s high time we come to you with an update, don’t you think? But let’s start with an announcement that is even more overdue:

We’re of course delighted to announce that SOMA has sold more than 1 million copies on PC and quite a lot more if you combine it with sales on PS4 and XBOX One. We passed the milestone some time ago but we just haven’t gotten around to announcing it until now.

For those of you who have been following our blog you might have read Thomas’ previous blog posts, such as the one made 6 months after the release of SOMA. There he mentions the fact that the game wasn’t really selling to its full potential but that we were hopeful that sales would continue growing over time. Reaching the one million milestone once again shows that our games have a really long tail and the way we like to interpret that is as a seal of quality and that our games receive a strong push over time through word of mouth. The game even sold quite a lot more last year than it did the year before that, but that has probably a lot to do with the buzz surrounding our studio thanks to the Rebirth release.

Anyway, we are truly happy and grateful that so many seem to have taken SOMA to their hearts. The project has generated revenue far greater than the investment but it’s the amazing reactions and feedback that we receive from our players that we cherish the most!

Now, looking to our latest game, Amnesia: Rebirth and how sales are going some 5 months after release.

Let’s start with the release date on the 20th of October last year. That day is by far the single best selling day in the studio’s history. The hype for Rebirth had built up, and as great reviews and wonderful “Let’s plays” started emerging just before the release, the game went to the top of Steam’s best seller list and stayed there for a few days. From that point onwards the game took on a similar sales trajectory as SOMA had, but during a pretty cluttered release period (with some big releases such as Cyberpunk 2077 in December for example) the sales went down a bit from there. The daily sales in the beginning of 2021 were a bit lower than what SOMA had at the start of 2016 – and it stayed like that for a while. However, sometime around mid february the sales really picked up again and we’re now back on a very similar trajectory as the one SOMA had.

As of today we’ve sold more than a hundred thousand copies of Amnesia: Rebirth and we feel really optimistic about the future for the game. We’ve seen a recent increase in “chatter” about the game and it is receiving a lot of love and praise. This combined with future sales events as well as a bigger update that we’re currently working on (news will follow shortly) we feel certain that the project will turn profitable in the not too distant future.

The weeks following the release of Rebirth was a bit of a mixed bag when it comes to reactions. While articles, reviews and a lot of streamers were predominantly very positive, there was undoubtedly a group of players who did not appreciate the direction in which we took the game. Quite a few people had their expectations and predetermined conceptions of what a followup to Amnesia: The Dark Descent should be like. Many hold The Dark Descent up to be one of the scariest games ever made and that is often attributed to its strong tension and many physiological scares. Of course Rebirth has sections of that as well but in general we took a different approach and wanted the horror to emerge more from how the narrative resonated with the player throughout the game. It’s probably true to say that Rebirth is more like a mix of SOMA and The Dark Descent while at the same time being a much more personal story.

We have set out to become a studio renowned for making people think and feel, not only while playing our games but also long after the game has finished. Just like SOMA talks about consciousness, we wanted to center the experience around a clear and central theme that a lot of players can recognize and we hope resonates with them. We wanted to see if we could get the player to care for something other than themselves and then have them face some really hard decisions as to how one values one life over another. Our hope was that this would remain with players long after the end credits had rolled. The key here, however, is to not only tell a story but to allow for the player to truly experience that story through interactive means. We believe we have succeeded in doing something really powerful in that regard with Rebirth.

So, while our efforts were put on creating a more overall psychological experience rather than the more short-term scares and tension, it was also extremely obvious to us that an attempt to outperform the success of The Dark Descent (on its home turf) would most likely lead to failure. Instead we decided to expand on the foundations of The Dark Descent and use this opportunity to explore some deeper themes. The outcome was a game with a strong identity of its own, but with a lot of recognizable elements from the first game. Apart from the expansion of the gameplay and the lore (from The Dark Descent) the highlights for most players seem to have been the story, the environments and Tasi as a character.

Pregnancy – is it a thing?

By avoiding to mention the pregnancy aspect of Rebirth (before the launch) we aimed to create a certain type of experience for our players. The pregnancy is the core vehicle for a lot of things in the game, and the theme itself requires the player to have built up a strong bond with their unborn baby by the time they reach the end. Already during pre-launch playtesting we could see that players going in without the knowledge of the pregnancy would get a really strong reaction and some even started adjusting their behavior after the reveal. Falling from heights, getting crushed under rubble or getting caught in a grenade explosion felt like devastating scenarios, and simple things like jumping down smaller ledges felt like less compelling actions.

It was important that the baby didn’t feel like a burden, but a helpful companion. By allowing the player to decrease their fear by talking to it we created a sense of helpfulness from the baby. It was no longer a one way street where the baby was relying on the player to make it through, but the relationship was more symbiotic. We also tried to establish the bond further by channelling Tasi’s feelings about the baby through her talks with it. Tasi’s comments during these sessions were always different depending on the context, situation, what the player had experienced so far and what the current goal was – something meant to make those moments extra interesting. Through the loading screens we also tried to set forth a certain understanding as to what Tasi has gone through and what was really at stake. The aim was to create a strong emotional setup for the final quarter of the game.

There’s no doubt whatsoever that the approach we took with the pregnancy and establishing the bond between a player and an unborn baby – was a huge risk and we spent a great amount of effort trying to make this work. A big part of the game relied on players immersing themselves in the role in order for the whole experience to work. We didn’t know if we would succeed with it and how it would be received.

As expected, playing as a pregnant woman and caring for your unborn baby didn’t resonate with everyone. Even though we knew this going in we probably underestimated how big of a turn-off the pregnancy aspect would be for some people, to the point where it completely overshadowed the rest of the game.

However, when it all worked, it did so with extreme potency and the result was a very powerful experience. For many players the pregnancy aspect evoked exactly the sort of feelings and raised the type of questions we were hoping for. These players identified fully with Tasi as a character and cared about the baby and its wellbeing, to the point where “checking in with the baby” became a thing they did even when they weren’t reminded by it kicking.

Consequences – are they worth dying for?

One of the most challenging things when you design a horror game is to make the player afraid of dying/failing and to maintain that feeling throughout the game. There has to be consequences to failure otherwise a lot of the horror and tension will go out the door. You also want to avoid too many repeated unsuccessful attempts as that shifts the feeling from fear over to frustration. The player shouldn’t end up in a “trial and error mode” and lose all the tension going forward.

In Rebirth the core death mechanic is what we call the “fear mechanic”. Tasi suffers from a weird affliction that gradually transforms here into a monster. If the player lets Tasi’s fear reach too high, she will eventually collapse, lose control and then come out of it having taken another step in her transformation. These moments allowed us to put the player in a different location and change the monster encounters to provide variety. Sometimes this made the path forward easier, but the consequence of the failure (excelled monster transformation) had still occurred and you were worse off for it.

The monster transformation aspect of the game has a strong narrative connection as part of the central dilemma the player is facing; whether they can be a suitable mother to their child or not. How much you had transformed into a monster also had various effects on the final parts of the game. Some were cosmetic in the way that your reflection changed if you looked into the fountain. There were also slight differences in the endings and you would fail more easily in the final fight of the game if you were further gone in your monster transformation.

We’re seeing a lot of mixed reactions when it comes to these types of consequences. For some people the mechanics we opted for worked out great. They felt a true sense of something big being at stake. For others, however, the whole narrative implication seems to have slipped past them completely. Instead they felt the opposite; that caving in to the fear mostly led to benefits such as monsters disappearing. In hindsight I think our intentions were right but even if it worked out well for a lot of people, we could have put more effort into making the “death moments” more tangible and clear. We could also have created a stronger sense of losing control (to your inner monster) and further enforced the threat it posed on your unborn child.

Looking to the future we are truly hyped. The project of developing Rebirth has really laid the organizational groundwork for how we as a studio can work moving forward and we have just initiated production on the next game (which has now had tons of pre-production time during Rebirth) and we’re kicking off pre-production on a second project as we speak.